Konidela Nagendra Babu, better known as Naga Babu, is an Indian actor and producer associated with the Telugu film industry. As a producer, he won one National Film Award and two Nandi Awards.

He acts mainly in supporting roles and villain roles, though he has also played the lead role in some films. He has acted in 143, Anji, Shock, Sri Ramadasu, Chandamama and Orange. He has produced several films with his brothers, Chiranjeevi and Pawan Kalyan under Anjana Productions. He has two children, actor Varun Tej and Niharika. He currently appears in television serials and is also a judge on the comedy show, Jabardasth, which aired on ETV Network. Allu Aravind, his brother-in-law, is a film producer. Naga Babu is the uncle of Allu Arjun, Ram Charan Teja, Allu Sirish and Sai Dharam Tej.

Naga Babu joined Jana Sena Party established by his brother Pawan Kalyan and contested as a M.P. candidate for Narasapuram Lok Sabha constituency in the 2019 Indian general election. He lost after securing 2,50,289 votes. 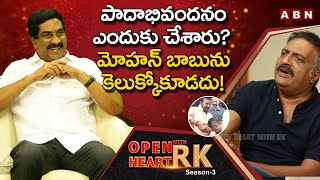